To get to Les Ponts de Martel we took the train to Lausanne and changed to a tilting train destined to Zurich and St. Gallen.  We stopped briefly at Yverdon les Bains where the preparations for the sugar beet harvest were in evidence with the large number of open cars ready to be loaded.  The "crocodile" locomotive at Yverdon was ready with a string of narrow gauge "skates". These tilting trains may be the most prestigious on the SBB network and they certainly run smoothly around curves but they ride badly at slow speed over switches and at speed have a galloping gait.  The old UIC type cars used on the Geneva Airport to Brig trains give a far superior ride.

At Neuchatel we changed to a local train to La Chaux-de-Fonds.  This was a multiple unit with a driver at each end.  The first drove from Neuchatel to Chambrelien where there is a reversal of direction.  The second driver drove the train the rest of the way to La Chaux-de-Fonds.  This saves the time it takes for one driver to walk from one end of the train to the other - there was a local train following us five minutes later.

Just before every hour at La Chaux-de-Fonds some seven trains from all directions converge.  There was even an SNCF single diesel car - required because of the differing voltages of the electrical systems of the two countries.  Within ten minutes or so all the trains have gone out again.  A perfect example of coordination between four companies and two gauges.

Our train was not very big and we found it almost completely filled with at about 30 kindergarden kids and five helpers.  The kids were packed in, some three to a seat, and were making quite a bit of noise although the teacher was very good.  As we took off out of the town there was a cry of "cheval". Then the teacher explained there would be a tunnel and this was greeted with loud anticipation.  The tunnel was a great success.  Then there was a big cry when someone spotted a "vache".  The kids all piled out at an early stop to visit a park.  The children were under good control and lined up outside the train but one little girl was a little unsure and insisted on holding the teacher's hand as she got down.  The teacher waved goodbye to us and smiled "maintenant calme".  We responded "bonne chance". 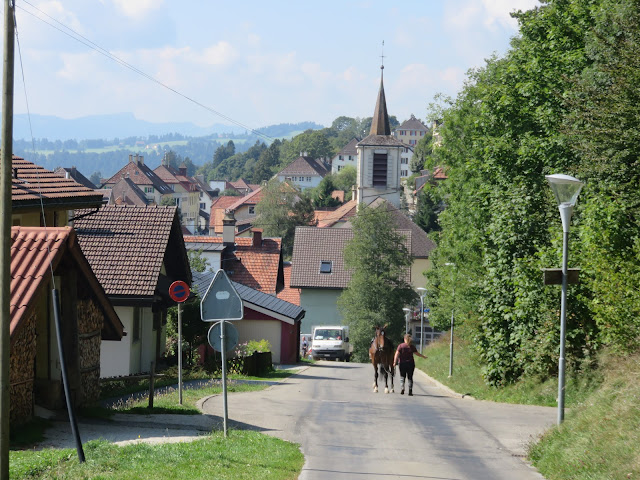 Les Ponts de Martel appears to be a small place and the train only stops there for five minutes or so before returning to La Chaux-de-Fonds.  We decided to walk around and found it was larger than expected.  In this part of the Jura the houses are enormous.  We found a good place for lunch.  There was a choice of three daily specials together with a salad and chocolate ice cream for dessert.  The room was well filled with working people, many were wearing high visibility clothing, and were obviously regulars.  The two waitresses would not take any stick from their customers.  In response to a snippy comment one said "ta guerle" a couple of times to her customers. 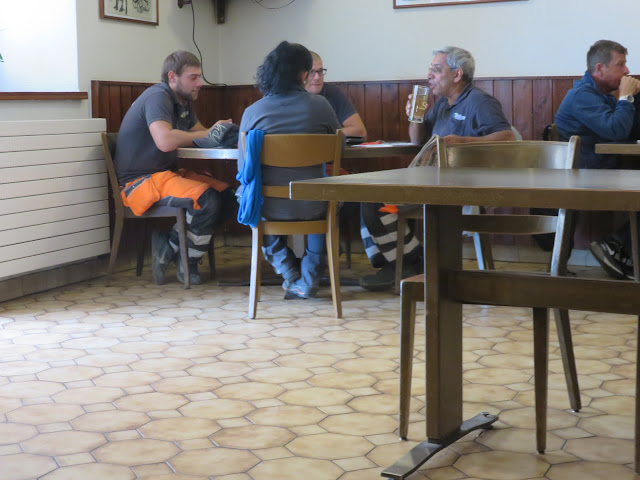 The food was good, I enjoyed the horsemeat while Mary had an enormous pizza. The meal came quickly and was cheap.  We had a half litre of Neuchatel white wine which was acceptable.  It only came in litre or half litre bottles.  The only alternative was Turkish.
We decided to short circuit our return by taking the post bus directly to Neuchatel.  The timetable said the bus was due at 1318 - of course it arrived at the stop at precisely 1317.  The ride was spectacular with some steep parts and hairpin bends. A little way out of Neuchatel we were invaded by a large number of school kids returning to school from lunch.  One kid soon found out we spoke English and explained that they learned English at school. They quickly became absorbed with a video game. 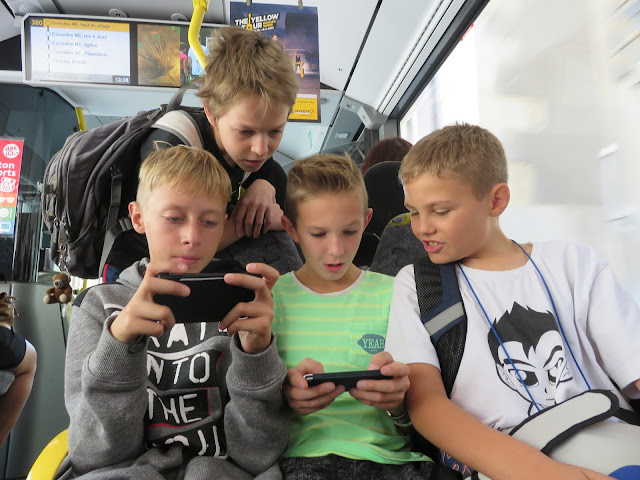 At Neuchatel we caught the first train back to Lausanne where we eventually found the Nespresso boutique to get some supplies.  The metro took us to the boat dock where we found the last steamer for Montreux had left about half an hour earlier.  It was then a toss up whether we should take the slow train back to Montreux or wait for the fast one.  We took the slow train which was a good move as there were problems at Vevey station and we reached Montreux before the fast train.
Posted by Colin Churcher at 11:10 AM