We decided to have an easy day today.  The sun was shining brightly and it was forecast to be hot all day. The funicular to Glion is very close and is a quick way to get up to a wonderful panorama over the Lake.

We had noticed a small restaurant with a lovely shady patio at Glion - La Pinte Jaman.  I asked "Est-ce que nous pouvons manger?" to which the reply was "Oui, si vous avez faim", and I responded "Et que nous avions de l'argent". Things started well and progressed from there.  We had found the term "pinte" in several places and asked its significance.  It turns out that "pinte" is a Swiss term for a restaurant that specializes in cheese dishes such as fondu, raclette and rosti.  It is only used in Switzerland - in France it is used in relation to beer. The first order of business was to wander around the patio looking at the various slates to decide what to eat and drink.  We decided upon a bottle of Chateau de Chatelard white (more about this later) and I had the hare (lievre) while Mary had the venison (cerf).  Both were excellent.
The spaetzle was very good having been boiled first then crisped up in oil. We had a conversation with the waiter and the four people at the next table about the difference between chestnuts and horse chestnuts (conkers).  It seems that châtaignes are the edible chestnuts while marrons refer to the raw conkers although the kids don't play conkers like they do in England. However, marron is also used such as in marron glace. 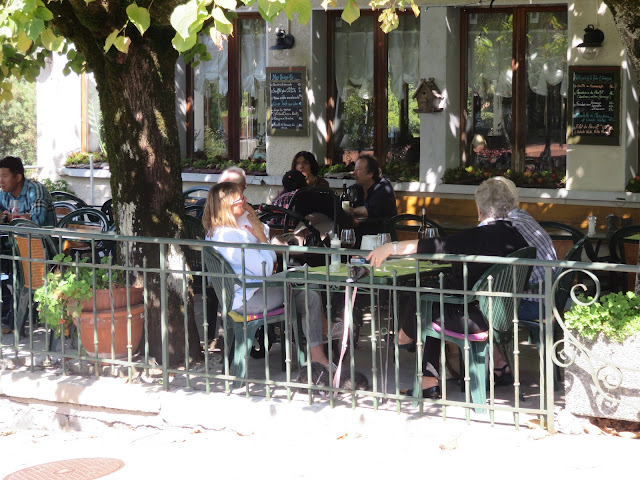 We wished everybody "Bon appetit et merci pour le leçon de français", promised to return and set off on the next part of our day.  Before going back to the station I took a picture of the Rochers de Naye rack railway car barns here.
I had deliberately chosen a bottle of Chateau de Chatelard because we had spotted the chateau from the train a few days ago. To get there we took the rack railway train down to Montreux then changed to the Montreux Oberland Railway (MOB) narrow gauge train to Chatelard which is a request stop. 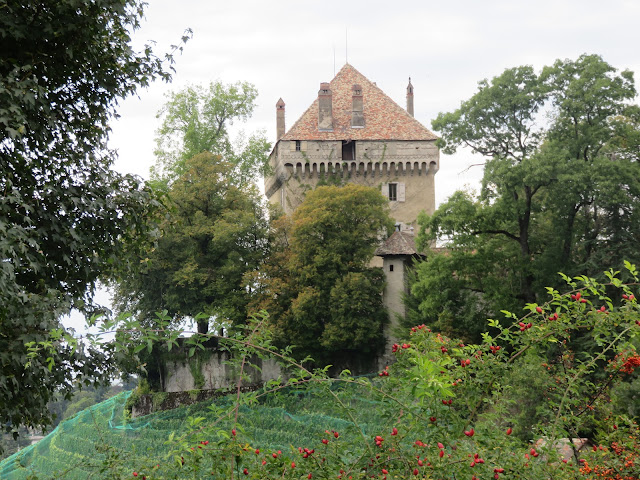 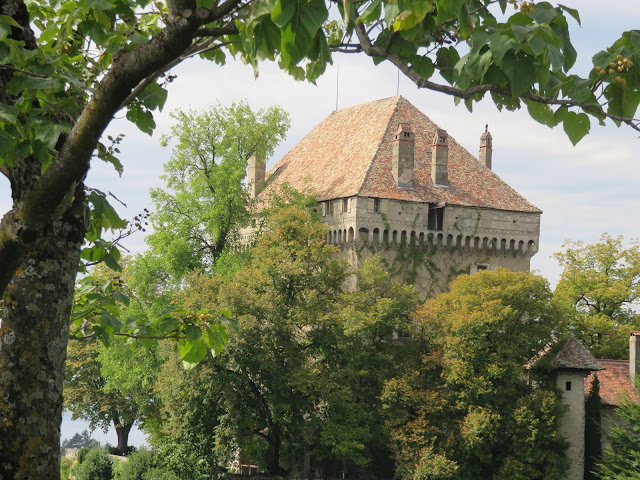 The views of the Chateau from the overlook were pretty good  and the weather was clear.
We came back to the apartment intending to set out an hour or two later to visit the Chateau de Chillon. However, it clouded over and began to rain with thunder and lightning.  The cloud was so low we couldn't see the other side of the lake.

Even so two out of three ain't bad.

Posted by Colin Churcher at 9:27 AM