It was cool and cloudy first thing and there was a little rain.  We took the train to Fribourg via Lausanne.  A common feature when traveling in Switzerland is to see people in military uniforms carrying their weapons.  They go for training periodically and bring their own guns.  Going up an escalator with the barrel of a gun pointing at you can be unnerving.  The train from Lausanne was a comfortable double deck one running between Geneva and St. Gallen.  The line climbs steeply away from Lac Leman and the upland area is different from the lake with mixed farming and forests.  By the time we had reached Fribourg the skies had cleared somewhat and we had a pleasant day. 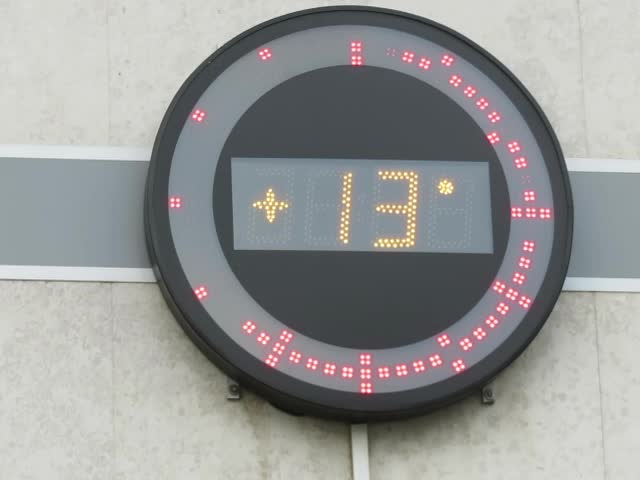 We were looking at railway clocks a few days ago.  This is a different sort on a wall in Fribourg - no connection with the railway
We took the water powered funicular (the last of its kind) into the lower town and walked along by the river. Many of the buildings are interesting and there were even a few sheep. There is a very large building which was shown as a grenier (attic) - maybe it was a tythe barn. 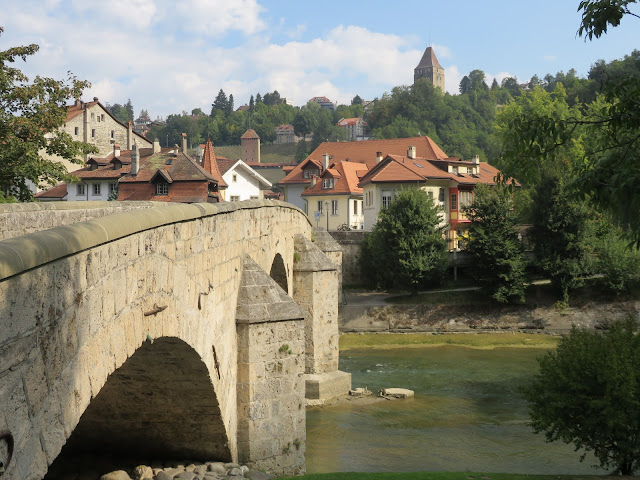 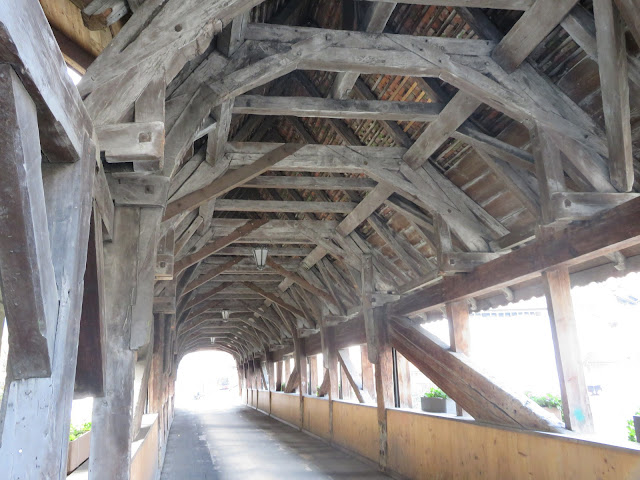 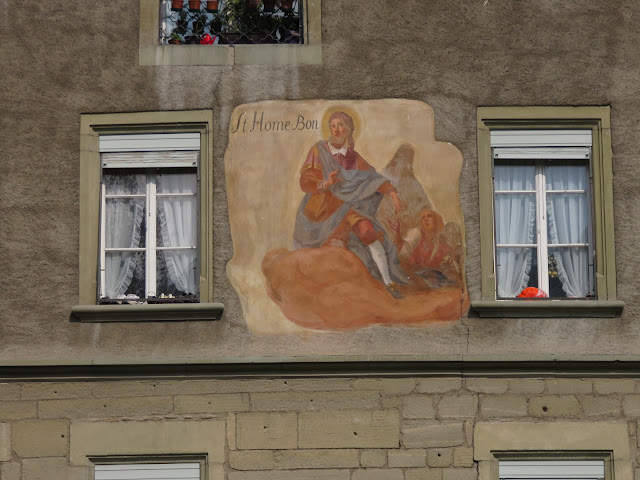 We found a small restaurant close to the funicular where we had lunch.  The plat du jour was chicken steak which was very good with a salad. This was a Greek restaurant and the wine selection was not good (it included retsina) so we had a glass of local white with the promise of better to come. 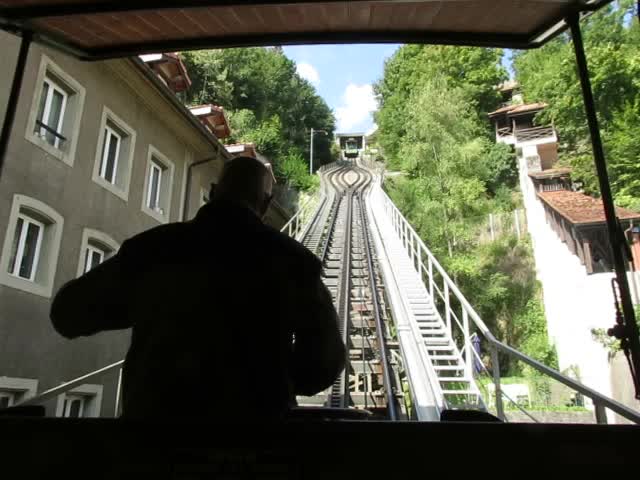 We took the funicular back up and than walked down into the area around the Hotel de Ville which also contains some interesting buildings.
This time a bus brought us back up to the railway station. There is a well frequented pedestrian area which is crossed by a major road - but the pedestrians have the right of way!

We caught a train back to Lausanne in good time to catch the paddle steamer "La Suisse" back to Montreux.  This is a delightful ride, especially in first class - which we get free on our Swiss Pass.  This was to check it out for our round trip on Tuesday.  The boat does not stop at Montreux on the way out so we had to stay on at Chateau de Chillon and come back to Montreux (what a hardship!)  La Suisse was built in 1910 and still retains the steam operated motion.  It has been lovingly restored and is gorgeous in every way.  The weather was good and the views along the lake were exceptional. There were good views of the trains along the lake to Montreux but also on the climb towards Fribourg. 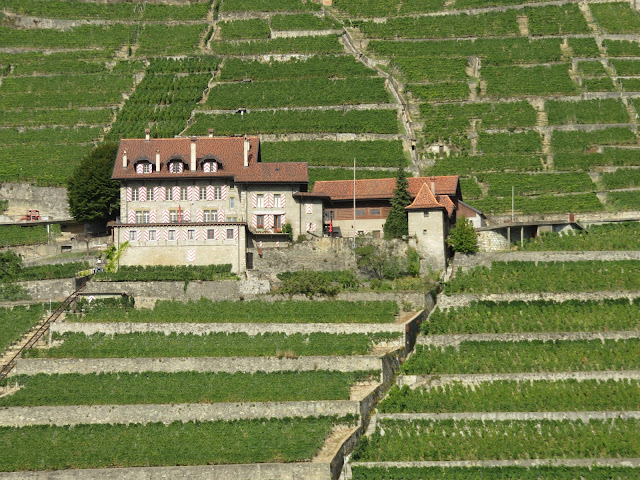 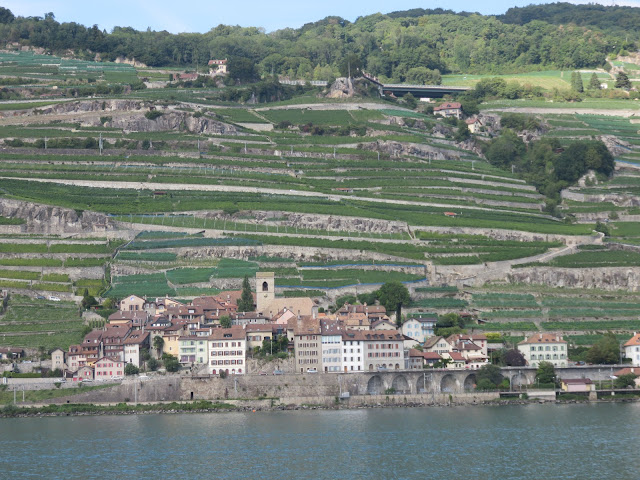 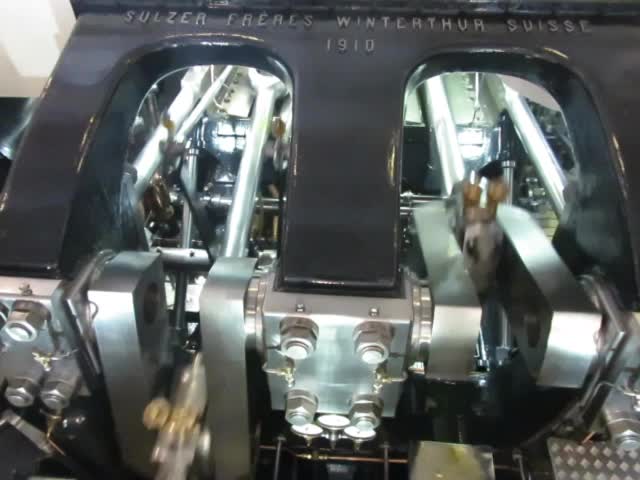 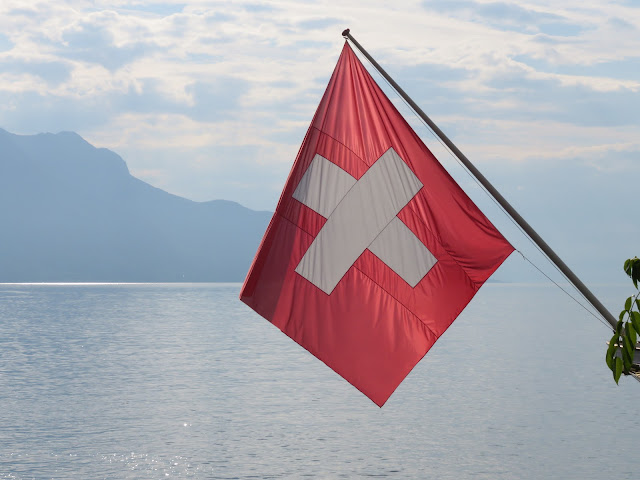 We did some grocery shopping on the way back to the apartment - somewhat of an anti climax after La Suisse.

Click here to see all pictures taken at Fribourg
Posted by Colin Churcher at 11:00 AM