At the station today one of the local trains was over 15 minutes late and this stabbed the next Geneva to Brig train.  This must have caused great consternation to the SBB who manage always to run their trains to time. An MOB train was held about five minutes for connecting passengers - but there were none.
To get to Gruyeres we had to take the Golden Pass train to Montbovon and transfer to a TPF.  The Golden Pass Panorama trains are high class swank trains full up with rich tourists whom I try to avoid - they all have detailed itineraries and reservations and have no real idea what they are going to see or why..  Having said that our first class Swiss passes got us into a comfortable car with the nobs.  In this train the driver sits in a small compartment in the roof so that the tourists can get an uninterrupted view forward..
This is a wonderful journey.  The metre gauge train twists and turns its way up above Montreux and there are good views at every turn.  I very rarely take a picture through glass so we just enjoy the scenery as it passes. There were two men travelling with us, one from Quebec and one from Florida.  They liked to travel the way we do - they even spoke quietly.

At Montbovon we had to wait to cross the tracks to get into the TRF train to Gruyeres.  One officious MOB train lady tried to keep all transferring passengers in one group until it was safe to cross the tracks.  To her consternation I wandered off a little way to get a picture.  I thought about telling her a thing or two about railway safety.
The train to Gruyeres was second class only and contained real people.  The line is not as spectacular as the climb up from Montreux but it runs through a very pleasant valley with steep sides and forests.  The fields are full of cattle, sheep and some horses and the only arable farming seems to be corn.

At the Gruyeres station there is a visitor centre where one can obtain trinkets and buy cheese.  There was a pleasant stroll (climb) to the village which is closed to vehicles and has been sanitized for the tourists.  As we walked along two tourist buses passed us ominously. As expected, the whole place, although beautiful, has been turned over to the tourists.  Gaggles were roaming around talking at high speed about nothing in particular and not taking in the wonders they were seeing. 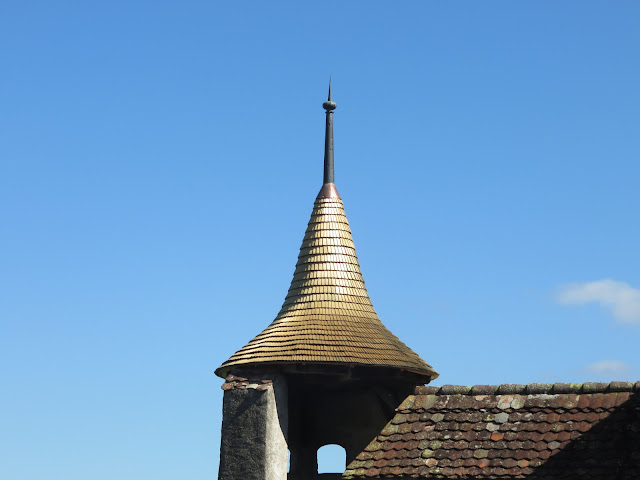 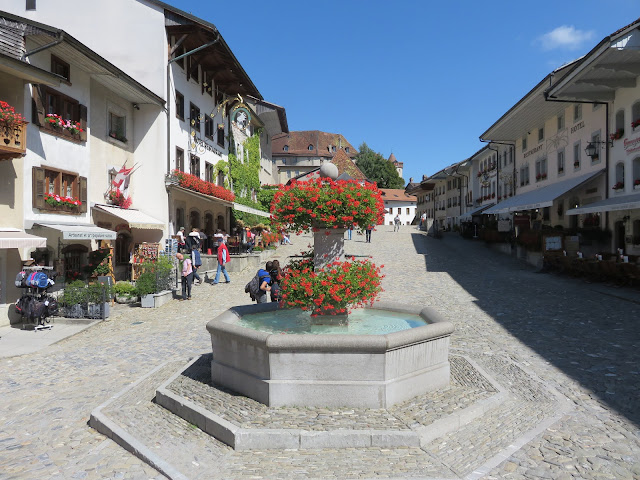 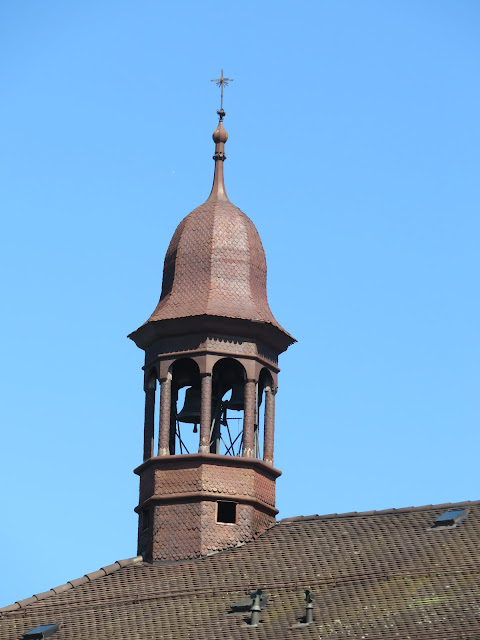 I had to laugh at a couple who asked a man to take their picture with an expensive camera.  They smiled beautifully and the view was magnificent but the picture was right into full sun.  I think they would have a really good silhouette. It wouldn't have been much better for a large group of German tourists who were having a group photo, all proudly wearing their name tags - with the camera facing into the sun.

The restaurants all had the same items on the menu and it was with some trepidation that we eventually chose one and went inside.  It turned out to have a very pleasant small balcony with a great view. Of course, we had to have fondue - moitie et moitie (Gruyeres and Vacherin).  It was excellent and very filling although there was enough room for a large dessert.
We strolled back to the station where Mary got into conversation with a man who had worked in the Beaver Club and other major restaurants in Canada.  Ten years ago they decided to settle in Gruyeres because his wife came from there but, although he came from Lausanne, he has not been accepted in this closed society.

The ride back was uneventful but very pleasant. Going into Montbovon a young mother with two children got on.  One of the small kids, wearing a perky cap really enjoyed looking out of the window and was upset when it was time to leave. We climbed up some steep sided valleys before dropping down into Montreux.  The forest is very dense and the trees are very tall indeed but the trunks are not very large. I presume they support each other.

Posted by Colin Churcher at 9:43 AM