For my continuing travel blog for 2016 please go to http://colinchurcher2016.blogspot.ca/
Posted by Colin Churcher at 1:42 AM No comments:

It was a beautiful bright and sunny day today although the wind was a little cold - nothing my parka couldn't handle.  I went for a walk through the Square des Batignolles then to Clichy and on to Au Pullman model railway shop and finally Saint-Lazare which was busy but not frantic.

Of course, the main meal of the day would be the menu de Saint Sylvestre this evening but we "snacked" on a brioche at lunchtime. 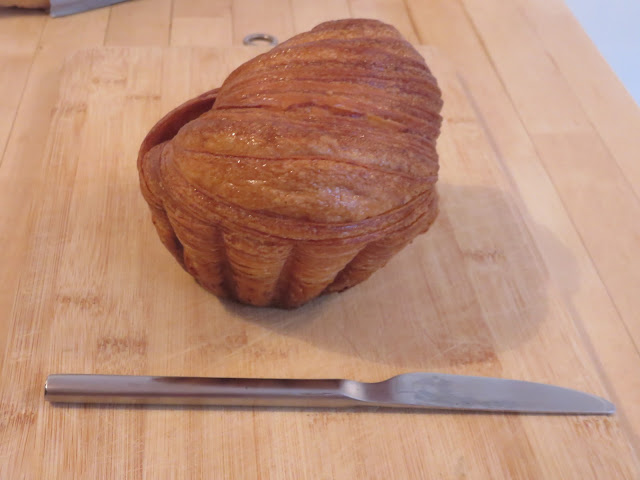 Public transport was free in Paris from 1700 on Thursday until 1200 on Friday and the RER was running all night.  Service is particularly good as well - the metro lines we rode were all running on three minute intervals.  The trains were not very crowded, yet the RATP had its platform staff out at Saint-Lazare to ensure people did not try to rush the closing doors.  There must have been at least 6 staff on each platform.

We arrived at Aux Iles Marquises in good time but several other tables were already in use. Apart from one other table, the restaurant was filled with people from the area, most of whom were greeted with hugs and kisses by Mme. Thiery 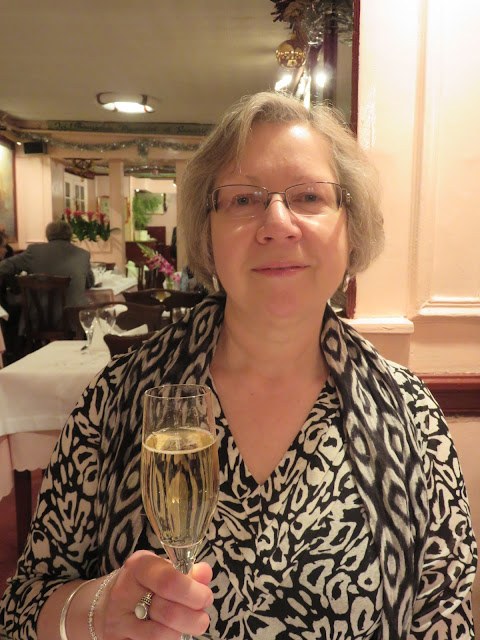 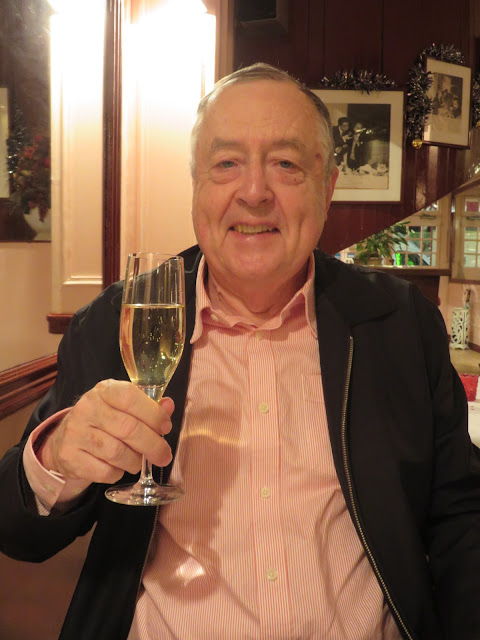 Of course, no decisions were necessary over the meal, other than how we wanted the venison cooked, so we were able to concentrate on the drinks.  Aux Iles Marquises has a good selection of half bottles of wine. So we chose half bottles - of champagne, a Puilly Fume white and a Saumur Champigny red. The champagne was good as were the two Loire Valley wines which have become our favorites.  And so to the meal.
There followed a granite de champagne which cleared the palate for the meat course.

The metro brought us back in time to celebrate the New Year at the apartment.  The metro was not crowded.  The city of Paris tried to reduce the numbers gathering on the Champs Elysees this year. Trains were not stop at the Champs Elysees station.  It was pretty quiet in our district although a few wandering groups were to be heard until around four o'clock.
Posted by Colin Churcher at 1:29 AM No comments:

We used a mobilis ticket to go to Versailles today.  The line from Saint-Lazare via La Defense to Versailles Rive Droite is the most convenient.  These trains date from the mid to late 1970s and are beginning to show their age.  We were rattling along and there was a very loud bang.  My first thought was that we had run over a torpedo, but some of the lights went out - circuit breaker.  A minute or so later there was another loud bang and the lights came back.  This was quite an entertining ride what with the loud traction motor sounds and views of the Eiffel Tower after La Defense.

We bought a quick lunch and walked into the grounds of the Chateau,  There were evidently a lot of tourists visiting Versailles, and many had rented four person electric golf carts to get around - not a good idea as many parts of the grounds were formerly a long way off for the average tourist.  The trianon and the lake are now within easy reach. 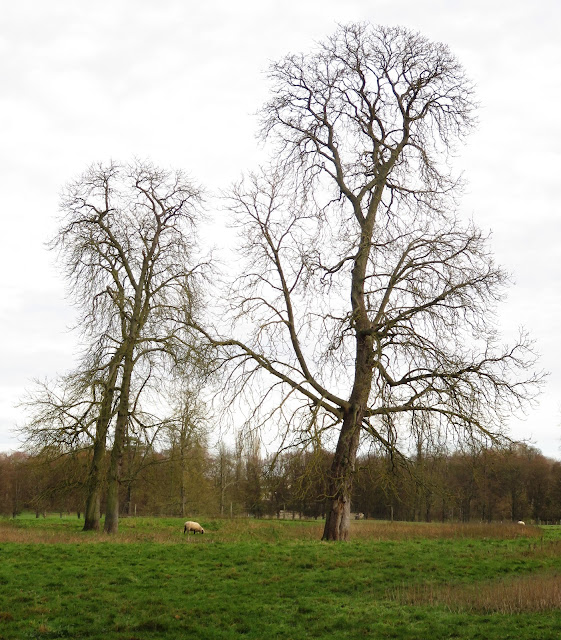 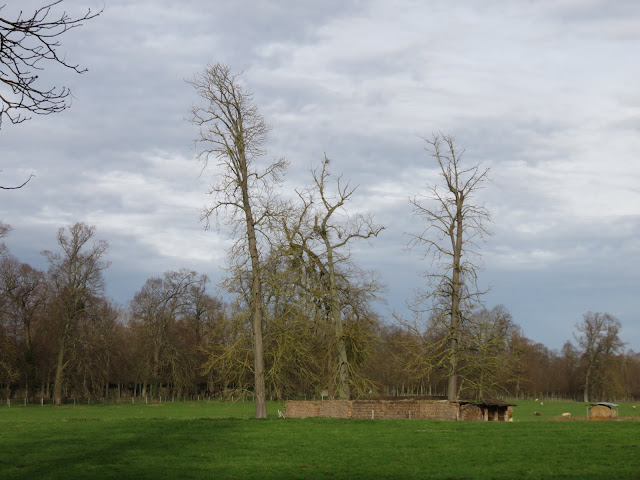 This evening we attended a concert at La Madeleine.  The performance was of the Mendelsohn Psalm 42 and Beethoven;s Ninth Symphony (The Choral).  The venue is superb but the acoustics can be difficult at times, particularly during the loud passages.  At the end of each section the echo lasted a second or so.  Nevertheless it was a very good performance that we both enjoyed.
The metro with a change at Saint-Lazare got us there and back in very good time.
Posted by Colin Churcher at 7:04 AM No comments:

It was a beautiful warm day today with a lot of sunshine.  We went first to the Hotel de Ville to see what was happening there.  The usual skating rink has been replaced by a display of endangered animals.  There is normally a photographic display which was replaced by some pictures and comments from the recent global warming summit meeting which was held here in November.  The message was that technology is helping us in the fight towards sustainability but we have a long way to go .

The Bastille was busy and the Christmas funfair was in full swing.

The Ile de Saint-Louis was quite busy but the crowds at Notre Dame were very heavy indeed - the heaviest we have seen in Paris on this trip.  We were not encouraged to linger and caught the metro back to Villiers.  Some grocery shopping was in order and we managed to score a barbecued poulet fermier and roast potatoes at our favorite butcher.  One surprise was that Nicolas, the local wine merchant, did not have Izarra (either yellow or green).  This will become a cause celebre.
Posted by Colin Churcher at 9:10 AM No comments:

I took a quick look at the Gare du Nord and Gare de l'Est this morning.  Both were very busy,  Gare de l'Est seemed to keep its normal air of calm.  The piano has been moved away from the platform end into the shopping area.

I saw one of the old 170xx locomotives on a local train at Gare de l'Est but could not get close enough to see the number.  First one I have seen on this trip.

I took the bus back from the Gare de l'Est.  The ride along rue Magenta to Barbes-Rochcchouart is always interesting as it passes through an accumulation of shops selling, wedding and formal wear, shoes etc.  Some of the gowns and suits are pretty garish.

This afternoon we went to an Icelandic movie at a cinema just off the Boulevard de Clichy.  With French subtitles, it was quite good but with only a handful of people it is not hard to understand why it was not in the first run places.  The building was interesting as it has been renovated from a much older cinema and there was an interesting display of old celluloid projectors.  The theatre itself was extremely large.

We had planned on having barbecued chicken this evening but it turned out that all of the butchers on Levis (all four of them) were closed today.  The back off was an excellent meal at the Bistro D'I-D which is very close to the apartment.

Posted by Colin Churcher at 9:13 AM No comments:

We took the metro to the Monge market which was very quiet and then walked to the Rue Mouffetarde.  This is normally busy on a Sunday but today it was very quiet indeed.  Tourism is obviously down heavily but it may be that Parisians have taken the opportunity to go out of town for the period between Christmas and the New Year.  So far as we were concerned it was good being able to move around easily. 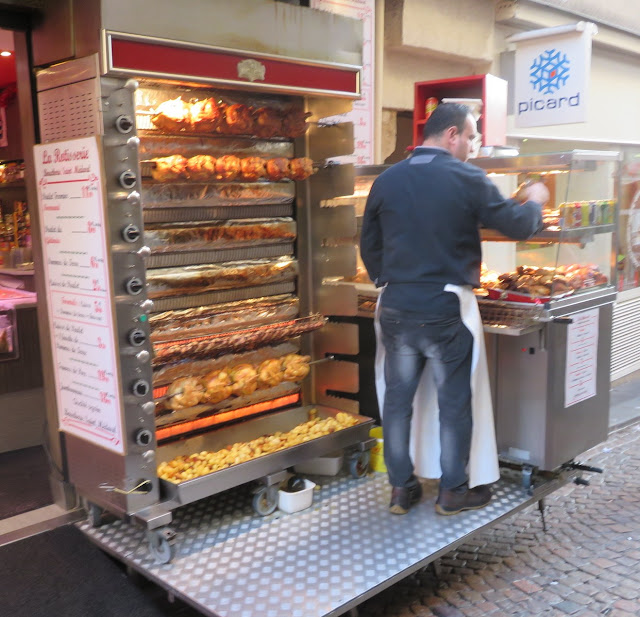 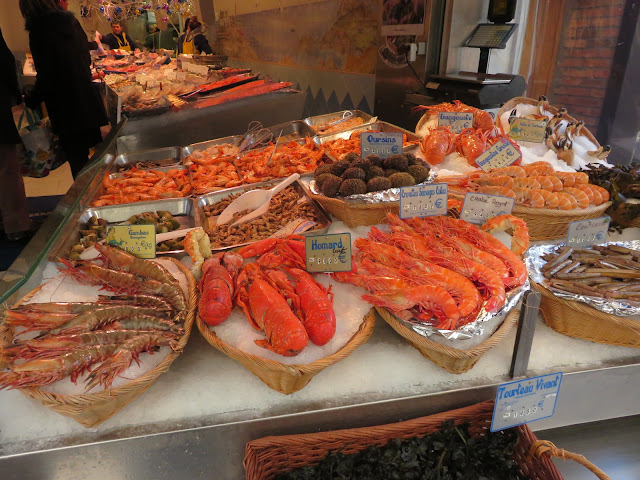 On Sunday mornings a group of locals get together with a piano accordion and a guitar and sing and dance in the area at the bottom of the street close to the church. When we passed first the accordionist was trying to get people together by singing La Mer.  A little later a couple were dancing and the seats for the spectators were beginning to fill up.  I found the video was a little difficult because of the constant stream of people.

This was a truly local Parisian experience and we spent some time watching the crowd and the dancing.  We had a hankering to go back to a restaurant on Mouffetarde to which we have been several tmes.  Mary liked the poele de St-Jacques which many tourists took as being chicken rather than scallops.  This time the menu has been changed slightly to St-Jacques a la Provencal which is more explicit.  It was very very good as was my confit de canard.  As usual we started with the onion soup which was very good but in a large bowl. 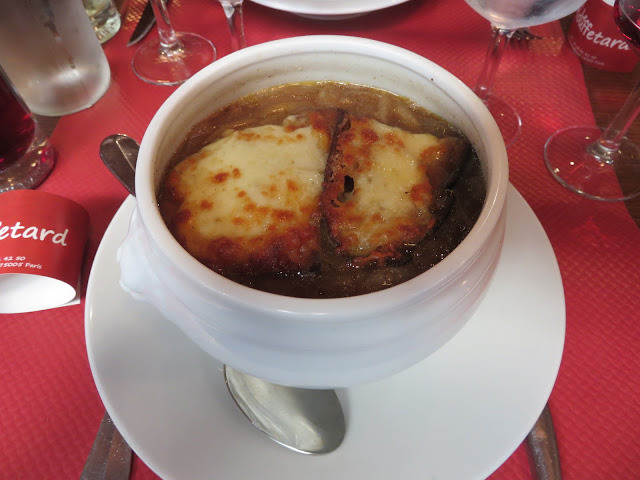 The Jardins de Luxembourg were quite busy in the warm sun but surprisingly there were no boats being sailed in the pond in front of the Senate building.  The gulls and mallards had the water to themselves. 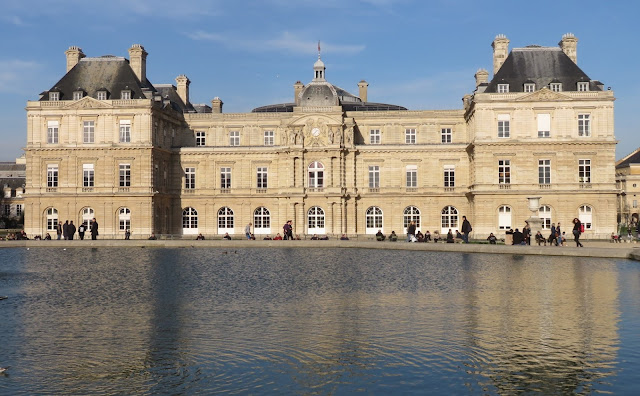 The restoration work on the front of St-Sulpice has been finished and it looks great.  Once again, there were few people around. 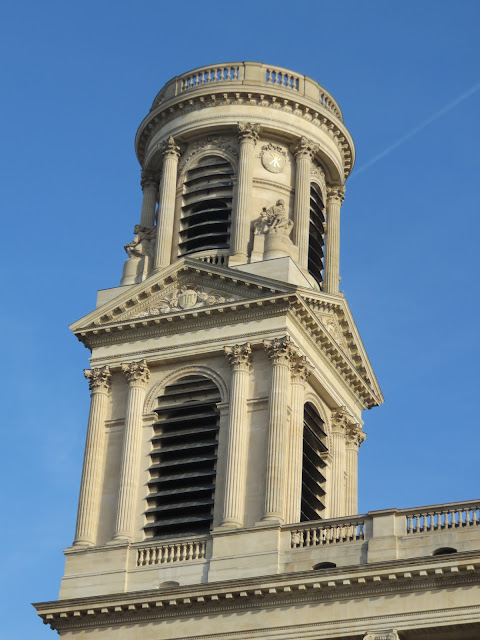 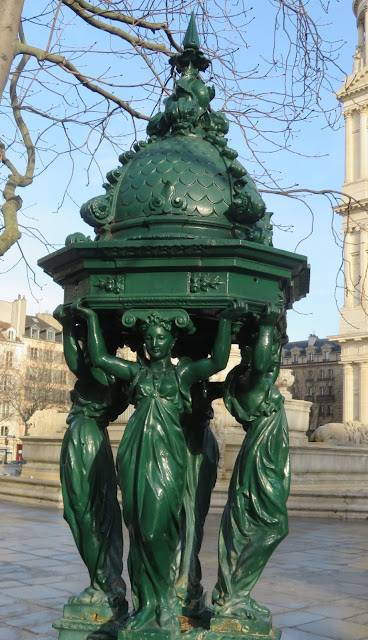 Posted by Colin Churcher at 6:52 AM No comments:

It was mild and sunny today and Buttes Chaumont was at its best.  I lot of work has been done in this park and the results are very good.  The one disappointment was that the overlook was closed for renovations. 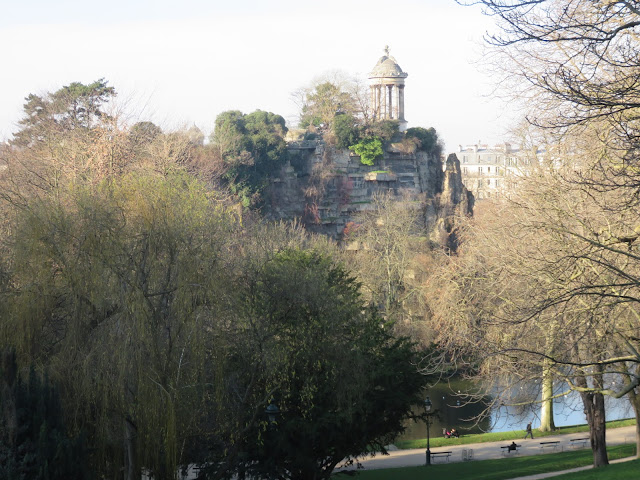 We walked back to the canal at Jaures and came back almost to the Bastille.  Unfortunately the city has caged off the canal with nasty green fencing and has destroyed what was formerly a pleasant walk into an obstacle course.
Mary came straight back while I looked in at Saint-Lazare which was very quiet indeed. 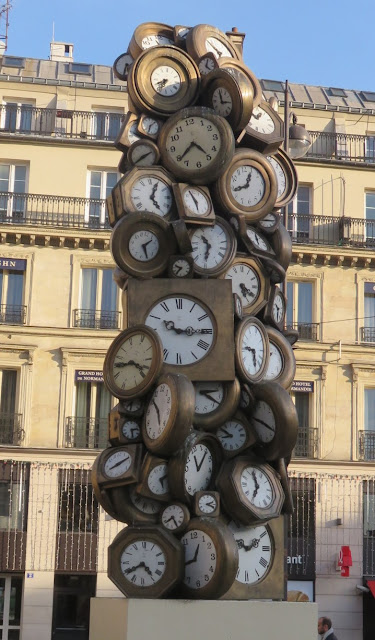 Dinner this evening was a very good cassoulet from a jar purchased from the charcuterie.  It was full of sausage and chicken.

Posted by Colin Churcher at 9:05 AM No comments: