Paul and I left early to take the Golden Pass line as far as Gstaad. The climb out of Montreux was spectacular as usual.  I tried unsuccessfully to get a picture of the haystacks in a field anchored with a stick and flying a Swiss flag.  The Montreux bound train was already waiting for our meet at Montbovon and we reached Gstaad on time.  Paul pointed out that much of the scenery appeared to be like a model railway with the grass a uniform color and it looked as if it had been mowed - the houses and buildings were dotted about at random - just like many model railways.  The Golden Pass train had almost 15 minutes at Gstaad and the Post Bus for Les Diablerets was not due out until a further 14 minutes after that. 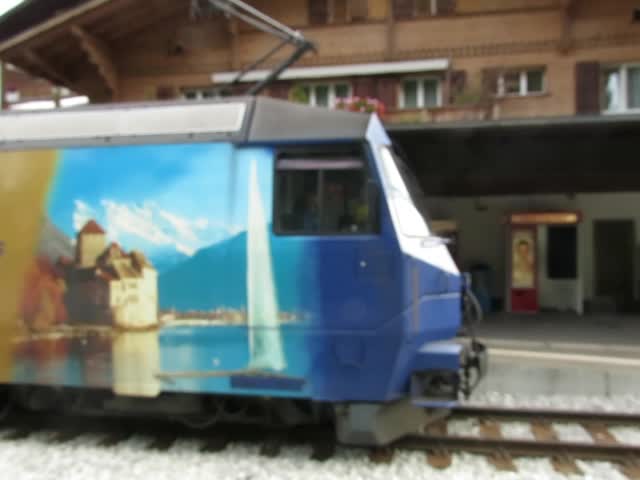 Two Post Buses were due out at the same time.  The doors were shut a little before time and on the second they both started off together.  The bus ride was through pleasant sunny countryside.  The bus was full with hikers who were dropped off at various points along the route so that just the two of us and two others were on board on arrival at Les Diablerets.
The two-car narrow gauge train arrived and left on schedule.  The ride to Aigle is all downhill through pleasant forests.  There is a detour into Le Sepey where there is a reversal and we started out back along the way we came in.

It is only a little before Aigle that we came into wine country dominated by the Chateau d'Aigle.  I took many pictures of this when we were there a few weeks ago so I just sat and enjoyed the view.
There was a quick connection with the train to Lausanne which took us there on time but under misty and darker skies.There was time to watch trains at Lausanne.  In a manner similar to Les Chaux-de-Fonds all the trains in all directions come in and leave around the same time so that connections can be made.  However, this is done on a half hourly cycle.  Thus Lausanne can go from being completely empty to eight trains and back again in a very short space of time.
Something I have never noticed before.  A train from Brig to Geneva Airport arrived behind an Re 460.  It was immediately set upon by a hoard of sparrows pecking away on the front, mostly around the various cables but some around the buffers and higher up. I finally realized that they were eating the tiny flies etc that had been picked up by the locomotive.  The area around the cables and buffers would contain a little oil or grease which would allow the dead flies to stick to the locomotive thus making a grand feast for the sparrows.

We took the Lausanne metro to Ouchy and embarked upon La Suisse where Mary had saved a table and provided a bottle of wine.  There was a large group on boear and we quickly moved to a quieter table but the journey was once again delightful.  We have now made this trip several times so I did not take pictures but merely enjoyed the experience.  The lady who has always been on La Suisse was once again present.  I found out from a crew member that Monique is, in fact, a fare paying passenger who cruised La Suisse all the time.  She has, in effect, become a member of the crew who bring her snacks etc. from time to time. It turns out that there is a man with spiky hair who also travels on La Suisse all the time - he is also in first class.

The CGN Chief Captain was on the bridge supervising a junior Captain.  There were a couple of less smooth dockings that the crew remarked upon.
At Chillon, Paul and I transferred to the Vevey and made the circuit via Villeneuve, Le Bouveret and St-Gingolfe to Vevey where we took a trolley bus back to the apartment.  I was about to put a fork into a tarte au citron that Mary had conjured up when I was instructed to take a picture for Fred.  I grudgingly complied.  The tarte was excellent although the pastry was a little robust.