We have been watching the weather forecasts for about a week to decide the best day to go up Gornergrat.  We chose today and it worked out very well.  It was sunny with just a few clouds and no precipitation.  It was a day with a lot of traveling but turned out well worth it. 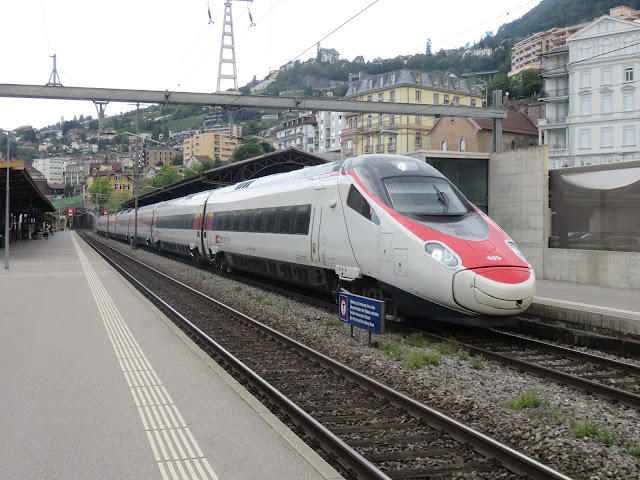 We caught one of the new SBB tilting trains ET 640 class which are on the run to Milan and Venice. It was full but we managed to find good seats in first class.  The ride was good and the acceleration was marked as well as the high speed through curves.  However, like all such trains it gave a rough ride through switches at low speeds.  We went through to Brig and had to return to Visp to catch the MGB - this time in a very comfortable double decker.

The MGB narrow gauge train to Zermatt was very comfortable but somehow managed to lose four minutes on schedule and I don't know why.  The line climbs most of the way along a valley with small villages with distinctive stone roofs.  The stone is similar to slate but much thicker, over an inch.  The single track line is very busy and we made a number of meets.
At Zermatt there is a spacious ticket area from which passengers are put into a holding pen to wait for the train.  It is a little bit like China where passengers are put into a cage which is opened to allow a mass of humanity to rush the train to try and get on board - devil take the hindmost.  This was not quite so bad but it did require some elbow agility to get a reasonable seat.

The views from the Gornergrat train are amazing.  It starts with the climb above Zermatt where the automobile is banned and then through quiet mixed forest with mainly coniferous trees.  Then the Matterhorn comes into view and seems to dominate our attention.  We rise above the tree line and there is a large expanse of  brown grass or vegetation with patches of snow.  Rising higher, we could see several glaciers.  At the summit the main thing to do is to look at the scenery - unless you like to shop. 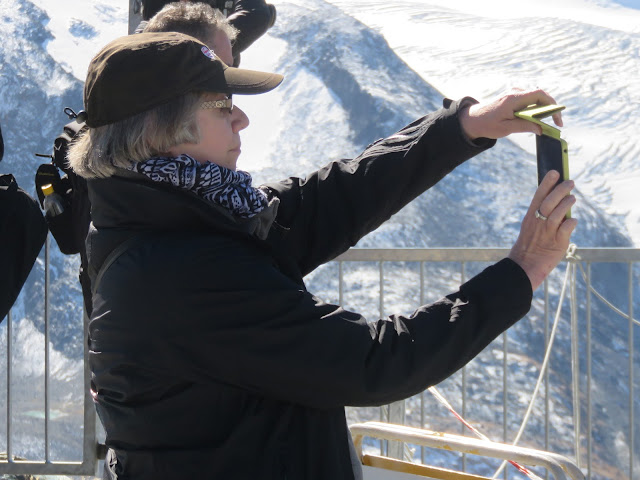 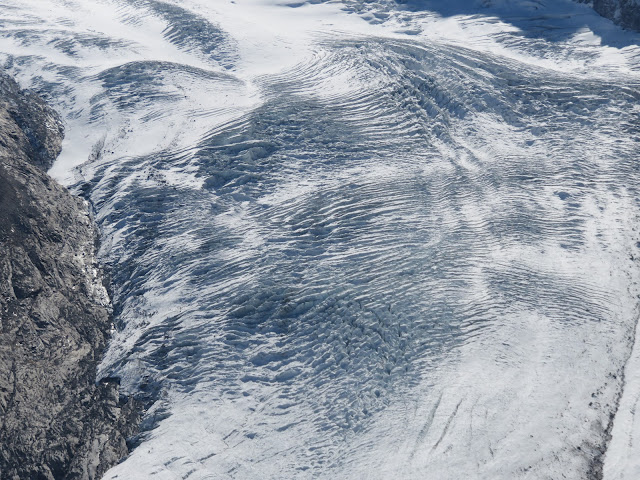 While making our way towards the summit Mary spotted an ibex sitting in the sun on a ledge in plain view.  We wondered at first whether it was a stuffed animal but it was certainly alive and allowed us to take plenty of photographs.  Most people missed it because it was very well camouflaged.  Its hide being very similar to the color of the rocks.  Apart from the Matterhorn, the ibex was the highlight of the summit. 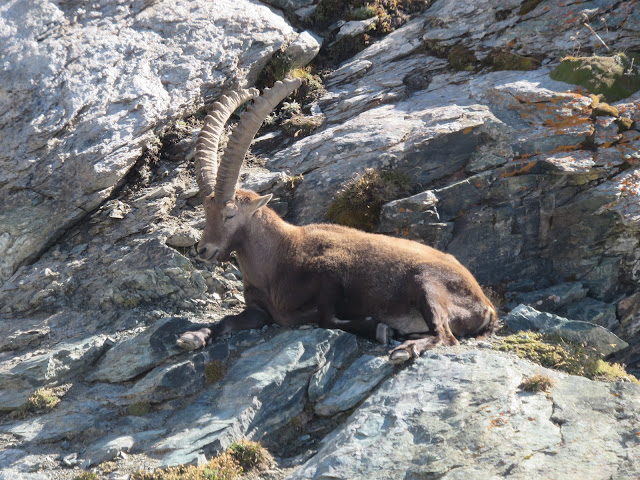 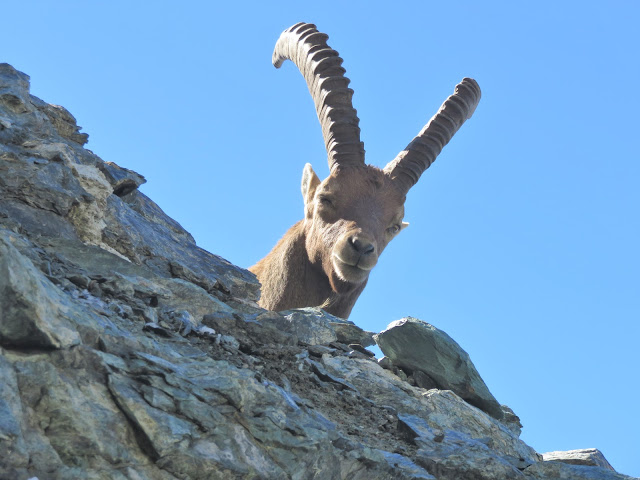 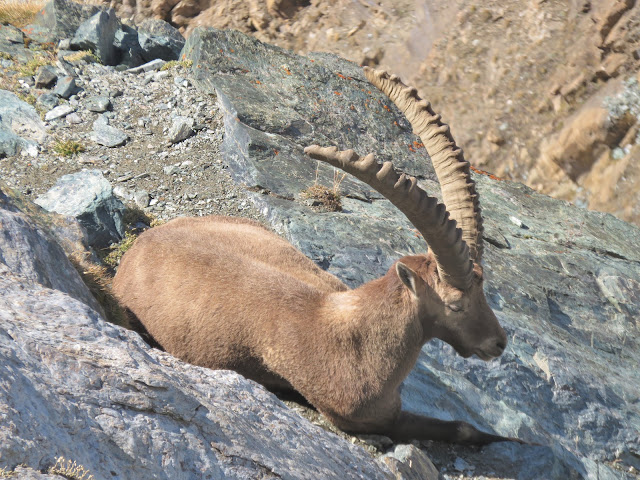 There were a large number of black birds flying around the summit, they had yellow beaks and red legs. These were Alpine Choughs.
https://en.wikipedia.org/wiki/Alpine_chough 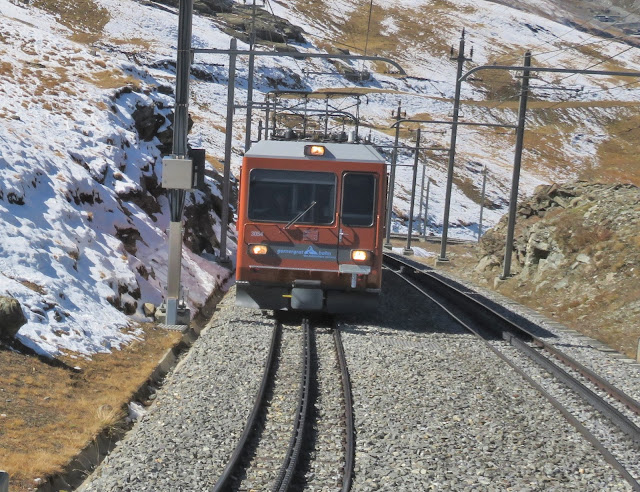 We took the train back down to Zermatt and looked around for lunch.  We found a restaurant and had rosti.

The three wait staff were all Portuguese from near Porto and there were several Portuguese friends hanging out.  One had a little girl who insisted on giving her dolly a bottle on the floor of the main entrance.

Afterwards we walked a little through Zermatt.  Only electric vehicles are allowed and the whole place is a pedestrian area in effect.  The entire town is given over to tourists and is not the sort of place where we would linger. 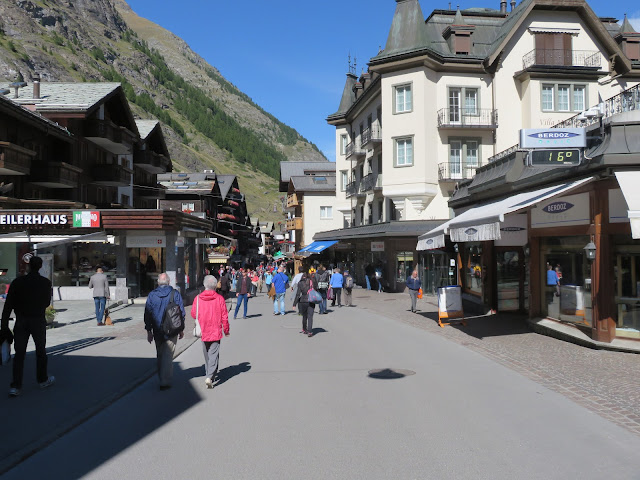 The train back to Visp was crowded and uncomfortable but we found good seats in first class from Visp to Montreux. It was a long and tiring day, particularly for Paul who is getting over jet lag.  But we chose well for the weather and enjoyed the amazing scenery.

Click here to see all Gornergrat pictures
Posted by Colin Churcher at 10:48 AM