The weather forecast was for rain midday but it was bright first thing. We took the bus to Bridgnorth and walked to the station.


Our train was pulled by a GWR 2-8-0 no 2857, much to my delight as I worked on these at Reading. I had a short talk with the crew and refamiliarized myself with the footplate. One of the crew reckoned he had met me in Brazil in the mid 1990s. They are using Scottish coal as Welsh coal is too hot and will burn the firebars.
The engine sounded great. It had a typical crisp GWR beat and was quite square showing that the valves were set correctly - a joy to hear. We went through to Bewdley where we had the opportunity to admire and I sampled a cast iron railway urinal. 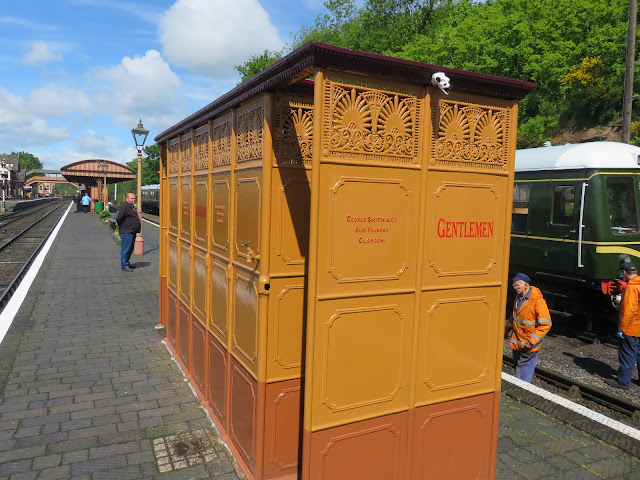 The weather was very changeable with periods of sun alternating with rain. I had a pint of 2857, a Bewdley ale but we had lunch at the George hotel in the centre of  town.

Over an ice cream we watched two geese with eight goslings. Some other geese were quite aggressive and turned them back. The journey back to Bridgnorth was behind a Flying Pig - ugh.  This brought us back just late enough to miss the next bus but we managed to catch a short sharp shower. It did give the opportunity to sample another Bridgnorth beer - Woods, which was very good.

The bus ride back was through short intense showers.  I hope this weather is finished now.

Click here to see all pictures taken Bridgnorth to Bewdley
Posted by Colin Churcher at 2:22 AM