Thursday 21 May - Welshpool and Llanfair Railway

We took the train to Welshpool and walked through the town and up the hill to the Raven Square station of the narrow gauge Welshpool and Llanfair Railway. We timed ourselves as there could be a tight connection going back. The station staff were all very friendly and helped a large party from Walsall who were also waiting for the train.

The train came down the bank into the station behind the Countess, one of the original locomotives immaculate in Great  Western Railway green and complete with a polished brass safety valve cover and copper cap around the stack/funnel.

The Countess took water, ran around the train and pulled us to Llanfair Caereinion
It was a beautiful day and we enjoyed spotting the pheasants, mostly male which were strutting around. The sheep and cattle were quite contented. The first part of the trip is up a fierce grade and there is then a gentle drop down with occasional humps and some severe curves.

At Llanfair we met Charles Spencer a friend from HOTRAK who was recently appointed general manager of the railway.  He greeted us in his fireman's coveralls and it is evident that he is taking a very hands on approach. After a quick discussion we decided to walk into the village to see if we could find lunch and return an hour or so later.

It was only a short walk into the village but it was either up or down.  We found the Goat Hotel which had a good lunch menu and suitably fortified we returned to the railway station. 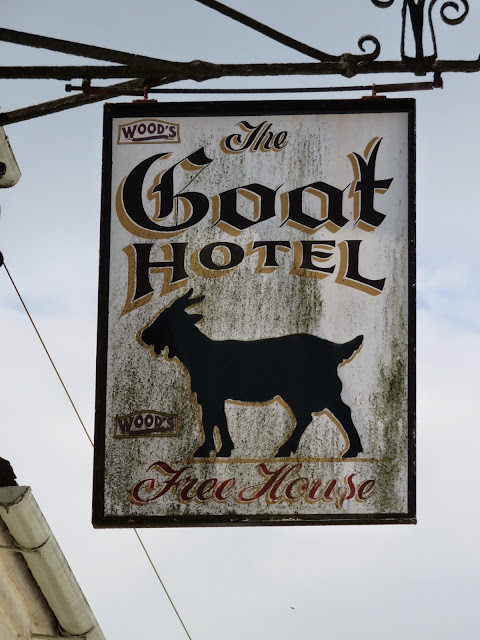 Mary was happy to spend the time in the cafe while Charles gave me a full tour.  The carriage shed contains some real gems including three cars built at Boston Lodge works according to the original plans, all in chocolate and cream with varnished wood interiors - just beautiful.

The locomotive shed contained a number of gems including Joan, from Antigua as well as The Earl the other original W&Ll locomotive.  In the yard the boiler from Sir Drefaldwyn was being delivered and the staff were eagerly awaiting its return to traffic, likely next year,  The machine shop is well equipped for the jobs required of it. 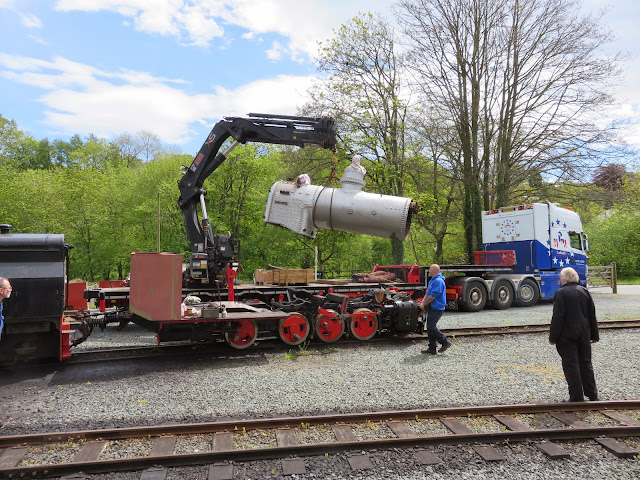 The Countess then returned from Welshpool and while it was being serviced (coal, water and ashes) I donned a borrowed boiler suit and pair of boots for my ride back on the engine. 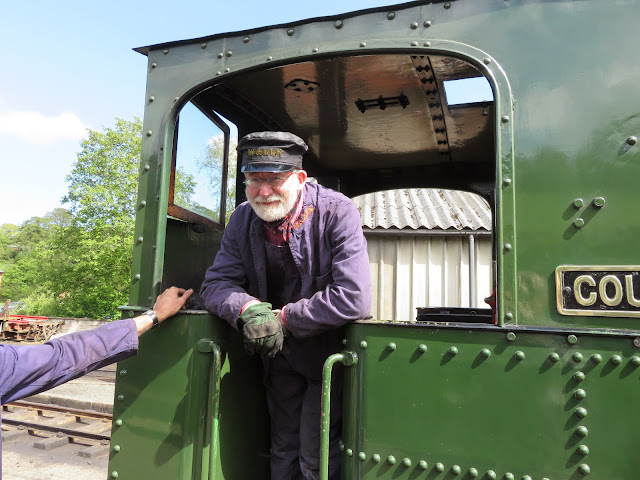 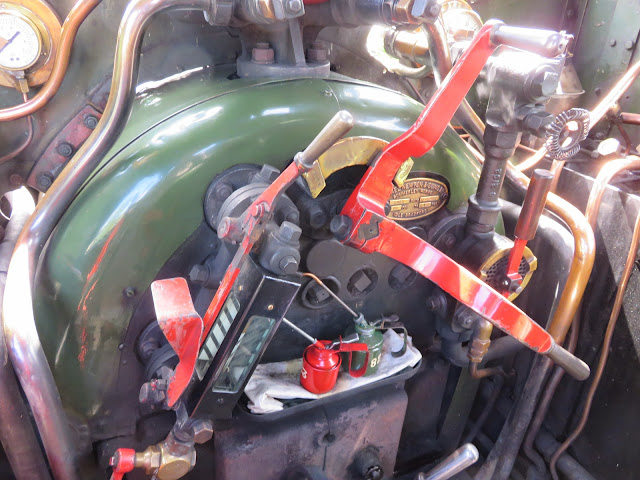 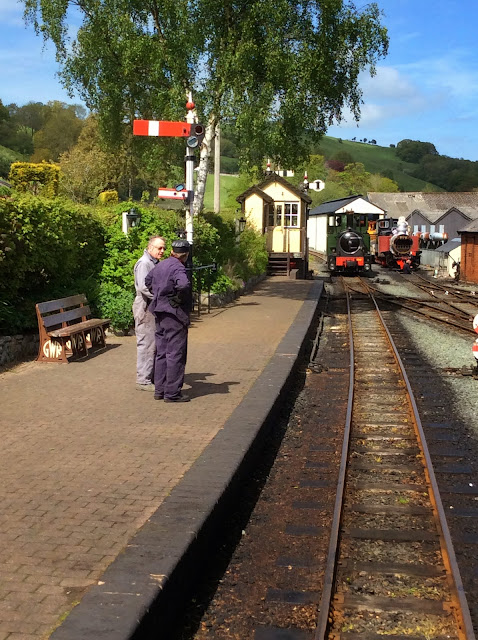 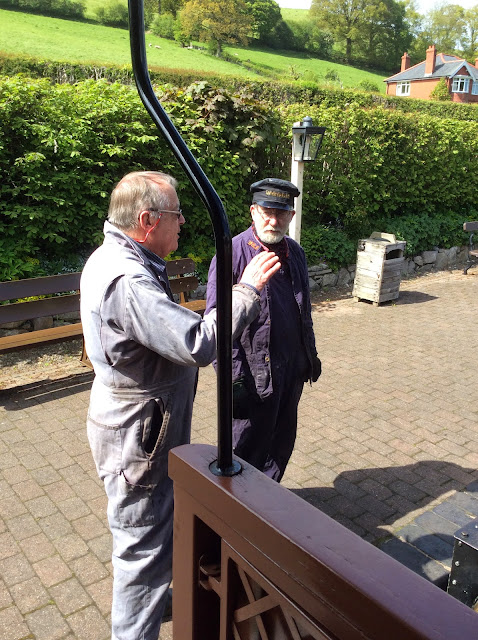 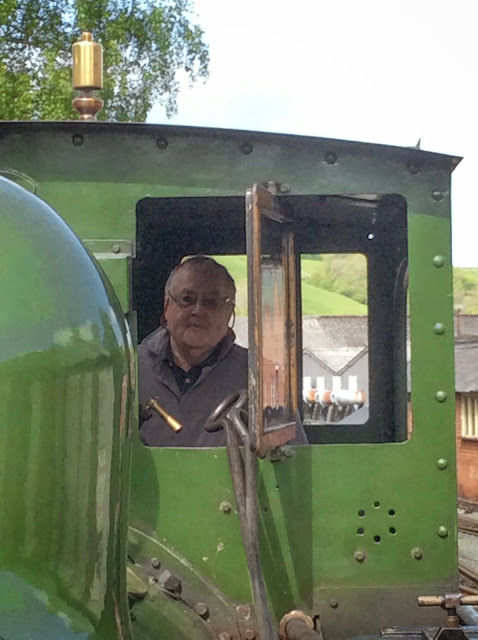 The Countess is a beautiful machine but small and there was not a great deal of room on the footplate for three people.  The firebox is very short and is wider than it is long.  Good Welsh coal was being used and it was normally fired in rounds of three shovelsful, first three across the front, then three across the back.  The footplate was pure Great Western right down to the firehole door, shoveling plate attached to the door handle with a chain etc.  The injector water controls were varnished hardwood and one water glass was fitted together with three trycocks,  The coal shovel was pretty small but even so it took a little manoeuvring to get the coal in the right place.  The fire irons were handy but were only necessary at the beginning to get the fire burning all over the firebed. The Welsh coal burnt quickly and provided a very high heat.

The steam pressure was maintained easily at around 145-150 lbs and the water level was around half a glass. Starting out from Llanfair the first mile or so is downhill which gives the engine a chance to warm up after standing for a while at Llanfair.  The fireman's injector was used to maintain the water level while the driver's injector was only used to prevent blowing off at the top of the hill towards Welshpool.  The injector came on quickly and didn't waste much water.  It was only used for short periods to prevent over filling the boiler.

Charles, who was fireman, was kept busy not only with the fire but verifying the crossings, several of which had to be protected manually.The engine rode quite well and was not particularly noisy.  The sun was shining brightly and we saw plenty of pheasants as well as rabbits and a buzzard. 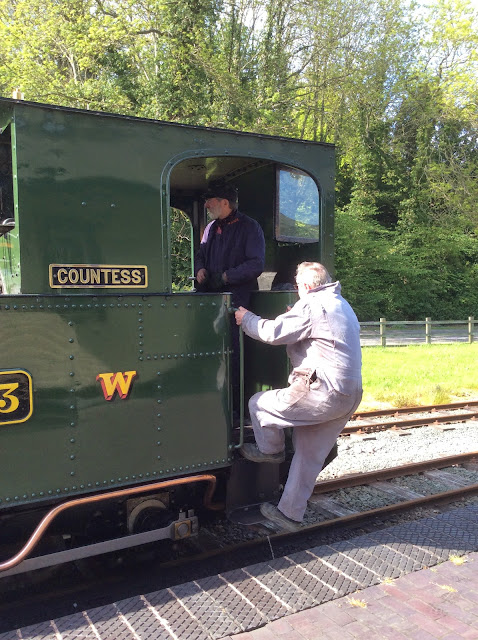 Altogether this was a very pleasant trip which I thoroughly enjoyed.  At Welshpool, I had to quickly change out of the boiler suit and boots and we walked through the town to the station.  Arriva trains Wales took us back to Shrewsbury right on time.  I had the opportunity to wash my hands on the train and we had a drink at the Three Fishes before returning to the apartment.

Click here to see all pictures taken this day
Posted by Colin Churcher at 9:14 AM