Thursday 28 May - Vale of Rheidol Railway

We took the same train again this morning out of Shrewsbury.
Slow departure as far as Sutton Bridge junction with the spires of St. Alkmonds and St. Marys prominent along with the Market Clock Tower and St. Julian's tower also visible.
A grass running track
Allotments
Traces of the Shropshire and Montgomeryshire Railway
Site of Hookagate Permanent Way depot
Chicken farm
Open countryside with much sheep pasture and a patchwork of bright yellow rapeseed.
The hills of mid-wales are a bright green with a few patches of yellow gorse. The hedgerows are a bright white with May blossom.
And that is just the first 15 minutes.

At Newtown we were joined by an Irish mother and her small boy from Bishops Castle. He straight away explained that they were going for the night at Aberystwyth. He was very chatty and curious and we talked the rest of the way to Aberystwyth.

The Vale of Rheidol Railway was doing a good business. We were hauled by no. 9 Prince of Wales. The staff were not uniformed, did not smile or wave and there was a general sloppiness in the operation. We were locked in the carriages. 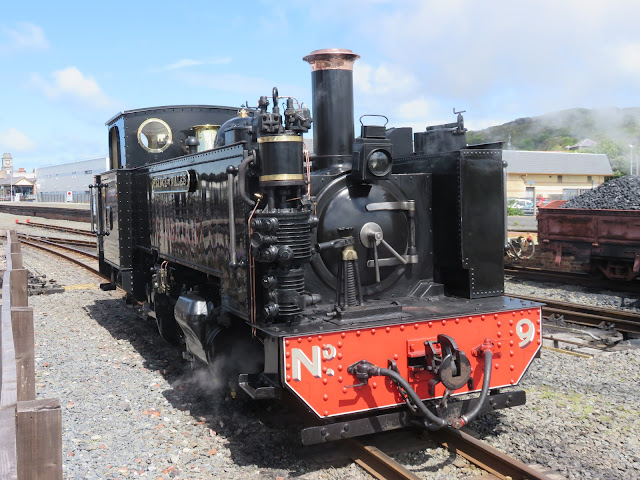 The weather was bright but it became cool as we climbed up to Devils Bridge. The line follows the hillside above a pleasant valley. The bluebells were very much in evidence. The hillsides were well wooded with trees of slightly different colours of green. We saw several hawks hovering high above the fields, probably kites. 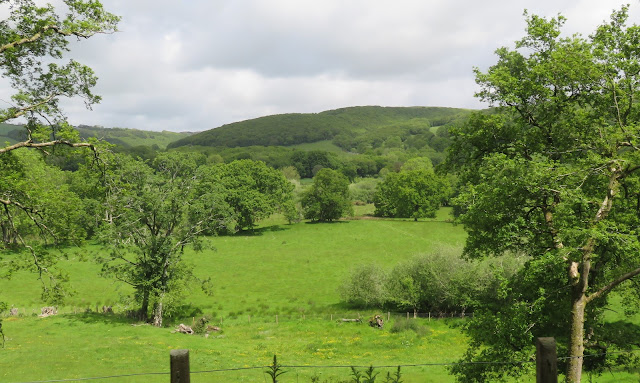 Devils Bridge gives one the impression of an Edwardian tea room that has seen better days.  We caught the next train back which was full of obnoxious kids and their obnoxious parents.
There was a quick exit at Aberystwyth but people were chanelled out through the tiny Booking Hall in the hope of increasing sales.
The Aberystwyth we saw was a low end seaside resort. There were lots of drinking establishments. There was a wide front with fish and chips and ice cream. There is a pier but to get to the end one has to walk through a nasty amusement arcade. We walked along the front to the cliff railway and rode to the top and back. It was then a short walk back to the station. 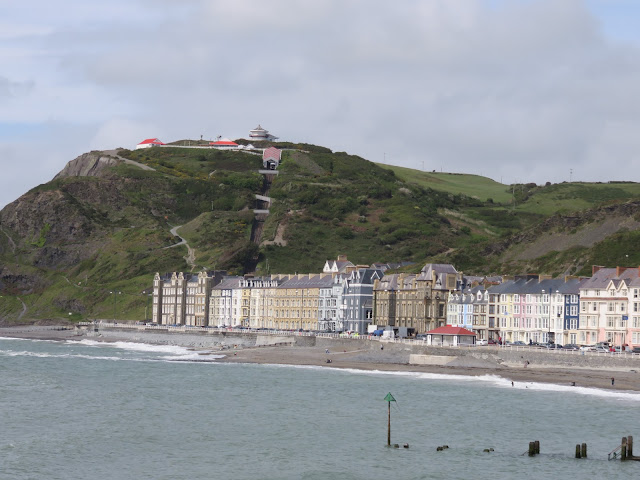 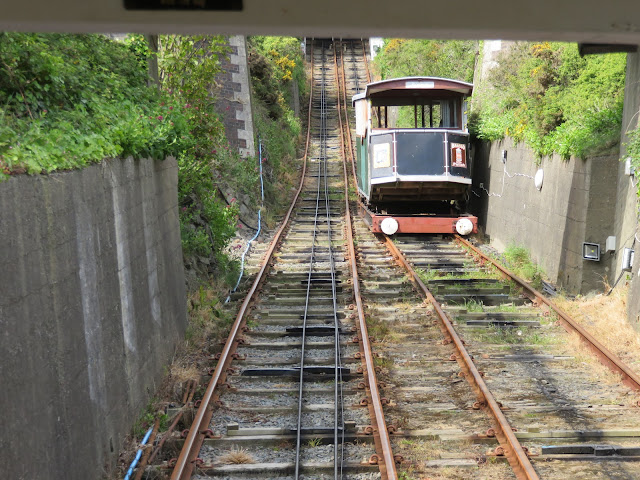 The ride back to Shrewsbury was delightful. I suspected it would be a short overcrowded train and placed myself by a door so as to score good seats. Borth seems to be a caravan park. After that the low sun highlighted the Covey estuary with its extensive salt marshes which were full up with sheep, Canada geese and a few swans and Shellducks. We left the marshes behind by Machynlleth and began some serious climbing. The motors were running flat out up Talerddig bank and the opposing train was in the hole at the top so we were able to cruise through without slowing significantly.
It was a pleasant end to the day. Let's hope the weather cooperates tomorrow.

Click here to see all pictures taken in Aberystwyth and the Vale of Rheidol
Posted by Colin Churcher at 1:49 AM