David Rhys-Tyler took me on a conducted tour of the London Overground railway system which has been set up in the last few years and has been expanding rapidly. The trains were originally three cars.  These became  four car trains but this was  found to be insufficient with the result that an additional 57 cars have been purchased to make trains five cars long.   Most of the trains we saw were five cars although there are still one or two four car ones.
I met David at Victoria station and we took the Victoria line to Highbury and Islington.  From there we took the train in a clockwise direction through Whitechapel, under the Thames, through Peckham and on to Clapham Junction where the Overground platforms are to the north of the main line making this station, already one of the busiest in the world, even more busy.
We changed trains at Clapham Junction and went to Willesden Junction. Here there was a pause for physical needs and we ate a baguette on a footbridge over the West Coast main line.  There was a continual succession of Pendolinos and other Virgin trains as well as local trains in and out of Euston.  There was a surprising number of freight trains hauled by a variety of diesel and electric locomotives with Canadian-built diesels being very much in evidence.
From Willesden Junction we continued on through Hampstead Heath past Highbury and Islington, where we completed the circuit, and carried on to the end of the line at Stratford.  Stratford was very busy with local and long distance passenger trains as well as a number of freight trains. This took me back to my train spotting days with David where we would watch the steam locomotives with Stratford works in the background - now replaced by the Olympic stadium.
Our last journey was on the National Rail train to Tottenham Hale where we caught the Victoria line back to central London.  It was an interesting journey with which I was pretty much unfamiliar.  In this trip we had crossed every main line that passes out of London. However, it cannot be said that the scenery was enticing as it was either industrial wasteland or Victorian housing with a little modern infilling. Even in the off peak the trains were well filled and it is evident that the new lines, which radiate around London rather than go towards the centre, are very well used. 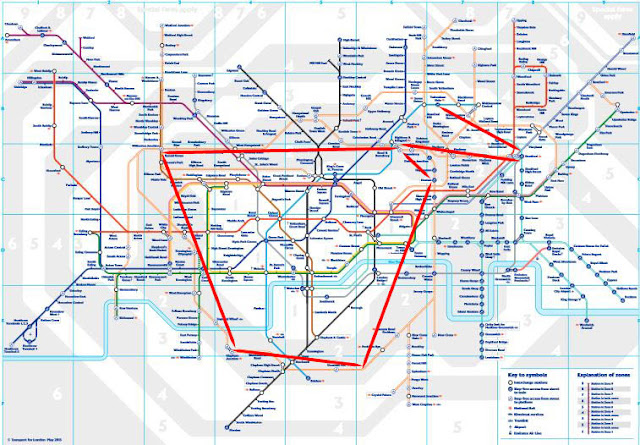 Posted by Colin Churcher at 7:54 AM